From West to East; The Greatest Transfer of Power and Wealth in the History of Mankind

The book 'From West to East' is a fantastic account of the greatest transfer of power and wealth from the traditional Western nations to the rising Eastern nations. 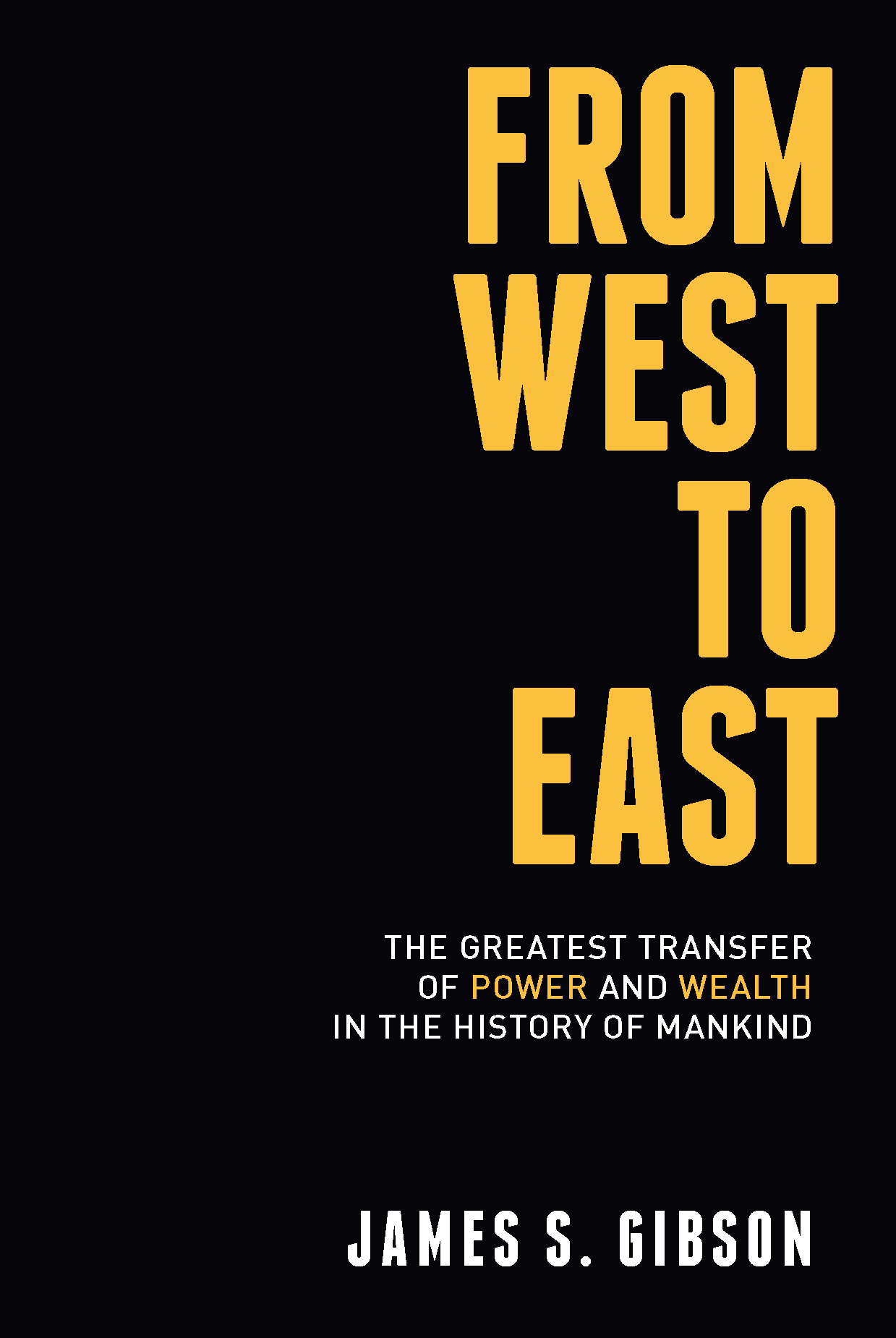 Written in a style and language that assumes no prior knowledge in the areas discussed, readers can easily follow the geopolitical changes and international intrigue that's currently happening and unfolding around us.

These ever more apparent effects are starting to touch all of us and the final chapter of this change will reverberate around the globe for many many generations to come.

We (and the Author) welcome your comments and feedback which you can add at the bottom of the page.

*Please add your book reviews to the Amazon store you bought it from.

We (and the Author) welcome your comments and feedback which you can add at the bottom of the page.

*Please add your book reviews to the Amazon store you bought it from.

A Gift to You From the Author

I am pleased to say that the Author of the book From West to East, has kindly given permission to reproduce the Prologue in full. This is to allow you to make an informed judgement on whether or not the subject matter and writing style is to your liking before you purchase the book.

The book is currently available in Paperback and Kindle through Amazon. I hope you enjoy the prologue of the book From West to East below and buy the full book.

From West to East Prologue

This is a story about the very gradual shift in the tectonic plates of global power and wealth, from the West (primarily the United States of America, United Kingdom, and European Union) to the East (primarily China and Russia), which became perceptible around the start of this millennium.

Since 2008 the movement in those tectonic plates has been picking up speed, to the point that it is becoming increasingly noticeable. It now appears we are approaching the final stages of what will be seen, in retrospect, as the greatest transfer of power and wealth in the history of mankind. How long this process will take to complete is impossible to predict, but the next three or four years will be crucial.

Within the principal storyline, there is a secondary storyline regarding a group of a few ultra-ultra wealthy family dynasties. Henceforth, the writer will refer to this small group of family dynasties as the “Puppeteers,” because they operate, unseen, from behind the curtain, pulling the strings of “The Powers That Be” (TPTB).

Over the last two centuries, it is hypothesised that the Puppeteers have carefully constructed a framework of organisations that have enabled them to accumulate massive financial power, which they have parlayed into enormous political influence around the world, particularly in the West. Their ultimate goals are a One World Currency and One World Government.

The reader may think that the Puppeteers are just another conspiracy theory. However, by the end of chapter one, the reader will probably arrive at the same conclusion as the writer: that the Puppeteers do exist, notwithstanding the fact that their identities and numbers may never be accurately known.

The Puppeteers, through their puppets TPTB in the United States of America, the United Kingdom, and Europe, are essentially waging a war with the East, principally China and Russia, because they refuse to accept vassal nation status in a US unipolar world. The Chinese and Russians seek a multipolar world, where nations respect the sovereign rights of other nations. As a result, China and Russia felt compelled to form an extraordinarily close alliance across the full spectrum i.e. geopolitical, financial, economic, military, energy, in a joint effort to resist being subjugated to vassal nation status to the United States.

This war is being waged financially and economically, as well as through regime change, proxy military action, and direct military action. It is noteworthy that approximately 96 percent of the Western mainstream media (MSM) is controlled by just six corporations, and they are heavily influenced by the Puppeteers. So the great majority of Western society are blissfully unaware of the historic developments that are unfolding, or if they are aware, their knowledge has been spun by the MSM so as to create entirely the wrong impression. Note (1)

Unlike the spin, misinformation, and outright lies spread by the Western mainstream media, both China and Russia are far more interested in trade, commerce, and the development of their two nations, and those of their neighbouring countries, than they are in military activity. Indeed, the mainstream media have been guilty of egregiously misleading Western society about these two nations, their leaders, their intentions, and their aspirations.

Over the last twenty-five years or so, China and Russia have undergone a metamorphosis, a great deal of which is unseen and unreported in the West. They have been quietly and steadily going about the business of making their nations more self-reliant and independent. The storyline of The Greatest Transfer of Power and Wealth in the History of Mankind is inextricably intertwined w with that of the Puppeteers. Together, they make a fascinating narrative, full of intrigue and deception. It is made all the more thought provoking because it has already impacted the lives of hundreds of millions of people around the world, both West and East, and will impact billions as the endgame plays out and the final outcome is decided.

As the story progresses, the reader may come to the rather depressing conclusion that the Puppeteers and TPTB appear to show little or no concern about the well-being of the other 99 percent-plus of the world’s population.

Matters are likely to come to a head when phase three of the (hurricane) crisis erupts and G20 agreement cannot be reached on an acceptable course of action to address the root causes of the crisis. The implications for billions of people around the world will be profound and are outlined in some detail in the final chapter.

The goals of the West (read Puppeteers) and the East (Chinese-Russian bloc) are almost diametrically opposed, and various possible outcomes are examined in the final chapter of the book along with the ramifications.

The writer makes absolutely no pretentions that this book is an academic work per se. Rather, it is an attempt to inform the reader about issues that are rarely addressed truthfully in the MSM. Certain aspects of this story are by their nature opaque; in such cases the writer will hypothesise on the basis of the anecdotal evidence available.

This subject matter, by its very nature, is very wide-ranging in its scope. So, rather than delve deeply into any one aspect, the writer’s intention is to provide the reader with sufficient details to obtain a clear, big-picture understanding of this shift in global power and wealth from the West to the East.

The notes accompanying this story are almost entirely Internet links to information. To make it easier for the reader to gain access to those Internet links, the writer recommends that the reader utilise the following link which will enable him/her to simply click on those links to Notes of interest.

If the reader seeks more information than is provided in the link, he or she will be able to do a simple Internet search that will, in almost all instances, throw up a plethora of additional links on the subject or issue. It is thus possible for the reader to delve as deeply as he or she so wishes into any subject matter covered in this story.

We (and the Author) welcome your comments and feedback which you can add below.

*Please add your book reviews to the Amazon store you bought it from in order to support the Author. Notes and links accompanying the book for you to reference can be easily accessed on GoldVu.