What to Seek and Avoid When You Buy Gold for Investment

What to Seek and Avoid When You Buy Gold for Investment

When you buy gold for investment it doesn't matter how often you have done it, there could be a chance that you lose your money.

This risk can be reduced to the point where it can be avoided. Being caught out can happen to everyone:

Here you will find out what to look for and what to avoid.

What to Look For

The following are the main points you should always look for when you buy gold for investment.

"Does the physical bullion directly belong to me"?

This is the single most important point to identify and is more of an issue with precious metals that aren't in your personal possession.

Gold and silver bars come with a unique serial number stamped on them by the refinery it came from.

With any purchases through GoldVu, all of your physical bullion is automatically and instantly allocated to you. Every time you access your Holding you can easily see the full allocated list of physical bullion products that you bought.

The serial numbers will allow you to identify your bars when you personally inspect them.

Conversely, if you don't have serial numbers, how are you supposed to prove which specific bars are yours?

If they say they can't give you your specific serial numbers then that's a massive red flag.

If this happens, you can be certain that the bullion won't allocated to you and most probably does not even exist. 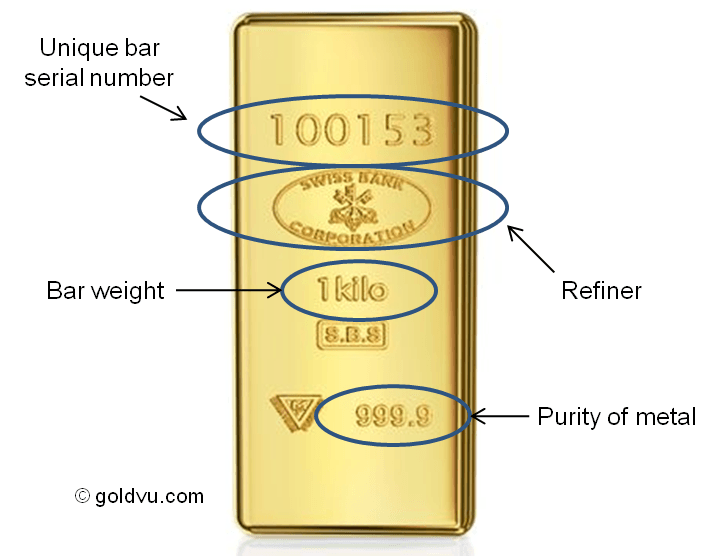 Coins don't have serial numbers on the metal itself (some refiners do, such as Valcambi), but there will be one on its original wholesale packaging from the refiner or mint.

You can get many individual gold and silver coins come in their own package, but these are usually from coin dealers and new from the mint or refiner rather than from the secondary market. The companies that vault tend to buy wholesale.

If the coins have been broken down from their packages then the company that buys and stores them for you should add them to special bags that have unique serial numbers.

With GoldVu you can easily access the list of your allocated bullion coins and check them when you perform a personal visit and audit to the vault that is storing them.

An Exception for When You Buy Gold for Investment

As ever - there is an exception, even for when you buy gold for investment. And this relates to a pooled bullion bar.

As the companies that offer vaulting buy the larger wholesale bars, there is often the case where the money you send isn't enough to buy a whole bar.

You can elect to share a bar with others that also don't have enough money to buy a whole bar.

It doesn't mean the bar isn't there. It's just you can only receive a serial number for bars you wholly own.

Each subsequent payment you send increases your share of that bar until you own 100% at which point you can then receive its serial number.

To make outright ownership easier, some providers offer smaller bar weights such as 1kg (32.15 ounces) gold bars, but these are not normally available as a pooled bar.

If you have few funds then buying physical silver bullion could be a better route as it is around 70 times cheaper than gold and you get the same great benefits of having your purchasing power preserved when buying gold as an investment.

A final note on allocated bullion -

After you buy gold for investment, you should always be paying a fee for the storage of allocated precious metals.

Generally speaking, in cases of disputes, one of the first things a court of law will seek to establish is whether or not a custodial storage fee was being charged.

It is instant proof that you had something of yours stored for you, on your behalf, on a custodial basis. The remainder of the battle is about proving what was stored.

Allocated bullion is your personal private property, you can do with it whatever you wish. This includes the very important notion of being able to visit your precious metals holding so that you can personally inspect your property.

However, bear in mind you can only inspect bullion that has been physically segregated and is not part the main allocated pool, otherwise there is no way to distinguish which exact bar is yours. Personal audits allows you to confirm that what you bought really exists and is not just an entry on your statement of account.

Before you buy gold for investment, always get an absolute yes or no answer from the company you are considering to deal with. There must not be any grey area on this.

With GoldVu you are able to visit all of the international vaults to inspect your physical Holding, just book an appointment through us to visit the vault. 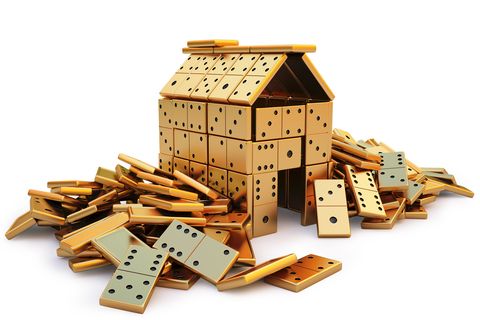 How secure do you want to be?

Yes They Are Allowed

If you can visit, then all is good so far. Be aware that they will charge you a minor fee for the relevant administration.

At a minimum, you should arrange to visit and inspect your stored bullion at least once a year.

If you buy a personal lifeboat to be installed on the Titanic - You want to make very sure that it's there before that ship sets sail!

Don't be afraid to arrange a visit to the vault. It'll also be a fun experience and will make for a good story.

No They Are Not Allowed

When you buy gold for investment and you can't visit and personally inspect your bullion then there is very high chance that it isn't there.

It doesn't matter that they can pull out lots of certificates from their external auditors as proof. That is not reason enough to trust them. You decided to buy gold for investment to protect your financial future - don't risk it on someone else's word.

One of the largest wilful corporate accounting frauds ever committed was by Enron. Enron did the same trick, using Arthur Andersen as their accountants and auditors as proof that everything was OK. Both companies collapsed as a result of the scandal.

I've heard all sorts of excuses and a common one is, "it's for security reasons". You shouldn't accept any excuse given.

Since about 2012, various banks in Switzerland have been creating excuses to clients to prevent them from seeing or taking delivery of their bullion, for bogus reasons.

Some of these clients pursued the banks with legal action and they eventually managed to take possession of their precious metals.

The serial numbers and year of manufacture were all different to what the clients had on file.

It turns out that because the clients hadn't visited their gold for so long that the banks decided that it wouldn't be missed and could be replaced with paper IOU's. The banks were forced to go and buy back new gold bars.

Hence the importance of auditing your bullion personally.

If it's your personal and private property then how can anyone have the right to dictate to you that you are not even allowed to see it or touch it!?

Not allowing personal audits of your personal private property is a massive red flag.

Whenever that happens - something smells!

If you are not allowed to inspect your privately stored bullion - use someone else.

Can You Have the Bullion Delivered?

When you buy gold for investment there may be a time and reason that you would want to have your bullion delivered. So having the option of delivery is important.

But it doesn't stop them from trying, like those Swiss did.

You can easily arrange to have your entire GoldVu Holding delivered to your doorstep if you want (Tip: make sure you know where you're going to hide it first).

Not allowing delivery is a massive red flag.

If that happens - you probably own a nice paper IOU!

As standard, ALL, providers that vault for you should be using external auditors and have insurance policies on the vaulted metals.

When you buy gold for investment and privately store it, you need to have confidence in their daily operations.

However, you should note that many vaults do require that for (their) safety reasons they do not wish it to be unilaterally available to the public. It should in all cases be accessible either when logged into a restricted client area or made available through a non-disclosure agreement. 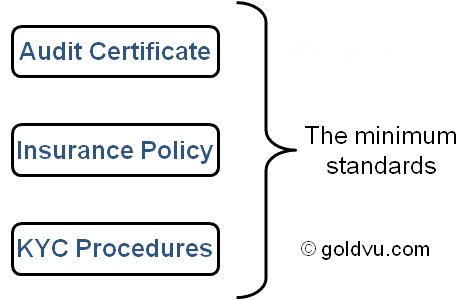 If they can't or won't provide you with copies of these documents then be concerned!

They should also have good Anti-Money Laundering (AML) and Know Your Client (KYC) procedures. You normally can tell this by the information they require from you when you open a live account with them.

At a minimum they should request a copy of identification, such as a passport and confirmation of your residential address, such as a utility bill.

If they care less about who you are and are more interested in taking your money when you buy gold for investment then this is could be an indication that there is a problem.

When opening a Central Holding with GoldVu, our AML and KYC procedures are completed directly by the Allocated Bullion Exchange. This way the vault providers have your details to hand should you wish to visit the vault and for the safety of your investments in the event of a business failure.

What Else To avoid

To ensure that when you buy gold for investment that it really exists, there are a few other problem areas you need to be aware of.

Physical gold and silver cannot be created out of thin air. You either have it or you don't.

This doesn't stop finance professionals from trying a bit of magic.

Unfortunately there is a great fraud being perpetrated every day through the use of paper and electronic entries. When you buy gold for investment, they can create as much of that as you want if it means getting their hands on your cash.

This has generated a huge rise in synthetic gold and silver that actually doesn't exist and never did.

The vast majority of people that try to buy gold as an investment have been conned into buying a paper product, not real allocated bullion.

The primary financial product they have bought into are Gold ETF Funds.

This also includes any bullion product that offers interest. It's impossible for a metal to give interest, only a synthetic fractional paper product can.

If you mention gold to the majority of financial advisers, you can be sure they will take out their file of almost endless list of paper precious metal financial instruments. None of which really exist.

If you stick to the points outlined above then you should be safe. Just be stubborn about asking and confirming:

Once you have identified some good providers then you should perform due diligence on them to buy gold and silver safely.

If you are considering to buy gold for investment (as either a company or an individual) through GoldVu then either open an account with us or at the least try a demo of our online system. We look forward to seeing you and establishing a good long-term relationship.